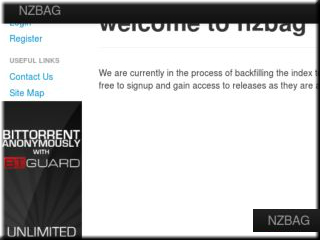 NZB.ag is a dead NZB site

Please see our list of best NZB sites for other alternatives

NZB.ag appears to be down as of early 2019. NZB.ag has a history of extended downtime. After NZBMatrix went down, the developers at NZB.ag got a bit upset and decided that they didn’t want to replace NZBMatrix; they wanted to make something that picked up where that site left off and offered something truly revolutionary. Currently, NZB.ag is running on a heavily modified version of Newznab but, to give some idea of how much the developers are shooting for with this NZB site, they’re developing their own software which they say should be debuting soon.

You can pay your subscription using your Card.

What the Site Offers

NZB.ag already has over 1 million NZBs in its indexes, but the developers say that this number is “super inaccurate” because they happen to have five different servers backfilling their database. In fact, one of those servers has 9 million NZB files on its own.

The developers are particularly proud of the fact that their combined skills – they all have over 10 years running large-scale websites – have allowed them to make their site faster and more useful to users. Their servers are custom-made, though they won’t give out information on them for security reasons. Their CDN does service the United States, but the exact location of the servers is not something that the developers really want to disclose.

Be sure to bookmark our NZB site page or keep checking back and signup for our newsletter if you want to be kept up to date.

What it Means for Users

Currently, NZB.ag is open for the public. There is a $10 VIP status that offers an increase in service beyond the 200 API requests and 10 NZB downloads per day that regular users get. That $10 applies for an entire year – it’s not a monthly fee – and, for that fee, you get 1000 API requests and 1000 NZB downloads per day, which is quite a bargain. The site’s developers say that they have no plans on switching over to an invite only server, so the site will hopefully be available to the public for the foreseeable future.

RSS feeds are supported by the site, as well, so users who like to use them to stay updated should find it quite useful.

Spirit of the Site

The developers at NZB.ag are really only worried about money insofar that enables them to keep the site up and running. They have managed to keep their costs down but, at the same time, they’ve been able to meet and exceed some challenges that other developers thought were impossible, such as getting pre-times down to 30 seconds. The site is currently supported by some advertising, but according to the developers it is all safe for work advertising and they don’t want to go the route of taking advertising that might be offensive to some users.

Overall, NZB.ag has already exhibited quite a few impressive features and promises to exhibit more in the future.

Also worth a look would be our list of Best Usenet Providers.