A bit of controversy on USENET related forums prompted an Astraweb employee to respond directly to posters. The criticisms were in regard to Astraweb seemingly acting instantly upon receiving a DMCA takedown notice about a binary on their USENET servers. Posters charged that Astraweb must have a staff working around the clock on taking down anything that was the subject of a DMCA complaint. The Astraweb employee told a different story, which got reposted on several sites. 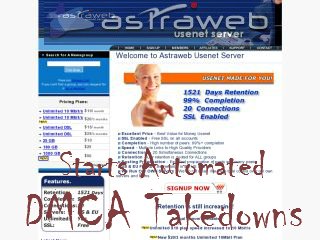 According to the employee, Astraweb has little choice in the matter. In his post, he writes “we have to comply or get shutdown”.

Critics charge that Astraweb could process the requests manually, avoiding frivolous DMCA takedown requests. The DMCA has been implicated in abusing the takedown system in the past and, according to many USENET users and many users of other filesharing services, some of their complaints are nothing more than hot air. Astraweb is reacting instantly, utilizing the automated process, and critics claim that this is not the right way to go, though they seem to understand why the company may choose this route.

The US government has already sued and taken down domains on behalf of copyright holders. MegaUpload was likely the most famous case and one that is currently still very controversial due to the way that the arrest and the investigation were conducted. Seeking to avoid being shut down, companies such as Astraweb are reacting to DMCA takedown notices instantly, not bothering to process them to see whether or not they are frivolous requests that have no basis or if they are legitimate requests being issued on behalf of a copyright holder who does own the property in question.

DMCA is an acronym for Digital Millennium Copyright Act. The act allows anybody who holds copyrighted material to request that service providers remove it if they find it on their servers. There are severe penalties for violating these requests and, if a USENET provider has servers located within the United States, they have to act on DMCA requests. The sticking point is that these companies only have to react to legitimate DMCA requests. If the companies react to each and every request that they receive, they may well be reacting to illegitimate requests and only compromising the quality of their own services.