The misc hierarchy on USENET is exactly what the name implies: miscellaneous topics. Even though there are seven hierarchies that were originally created to better organize the USENET and an eighth category, humanities, was added in the mid-1990s to make the system of organization even better, there are still some subjects that just don ’t fit in quite anywhere. 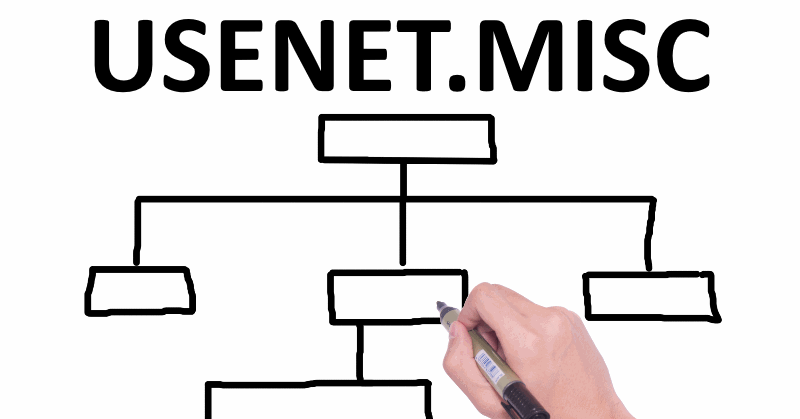 When this is the case, you ’ll find them in the misc hierarchy. This USENET hierarchy can be particularly fun because of the tremendous array of subjects covered by the various newsgroups.

These groups do differ a bit, in most cases, from their similar groups on the other hierarchies. Like the other Big Eight hierarchies, many of the groups on the misc hierarchy have been around for a while and have plenty of long term followers. This is a great hierarchy to take a look at if you just want to meet some new people and enjoy yourself.

The misc hierarchy is propagated across most of the large USENET servers in the world. Because it is well-established, most administrators offer it to their subscribers.

The groups on this hierarchy are created by referendum, which means that there arent the problems that exist in the hierarchies outside of the Big Eight, such as bogus groups and groups that are created simply to propagate spam. This is one of the most spontaneous hierarchies that manages to remain useful and interesting to a broad selection of users.

Remember to keep your posts on topic. Even though the misc hierarchy is very spontaneous by nature, the newsgroups do tend to be specific within themselves. This means that its still important to keep to the rules of netiquette and to stay within the topic of the conversations posted.

If you run into a newsgroup that seems too random for your taste, look for one thats moderated. These groups have human moderators that make sure that the posts are on topic and that people respect each other in their posts. This can make newsgroups more informative and more fun.

The misc hierarchy contains so many different newsgroups that you could spend a lot of time just finding out what all of them are and all of the different options it offers you. Being one of the mainstream hierarchies, however, they are all generally the very high-quality.